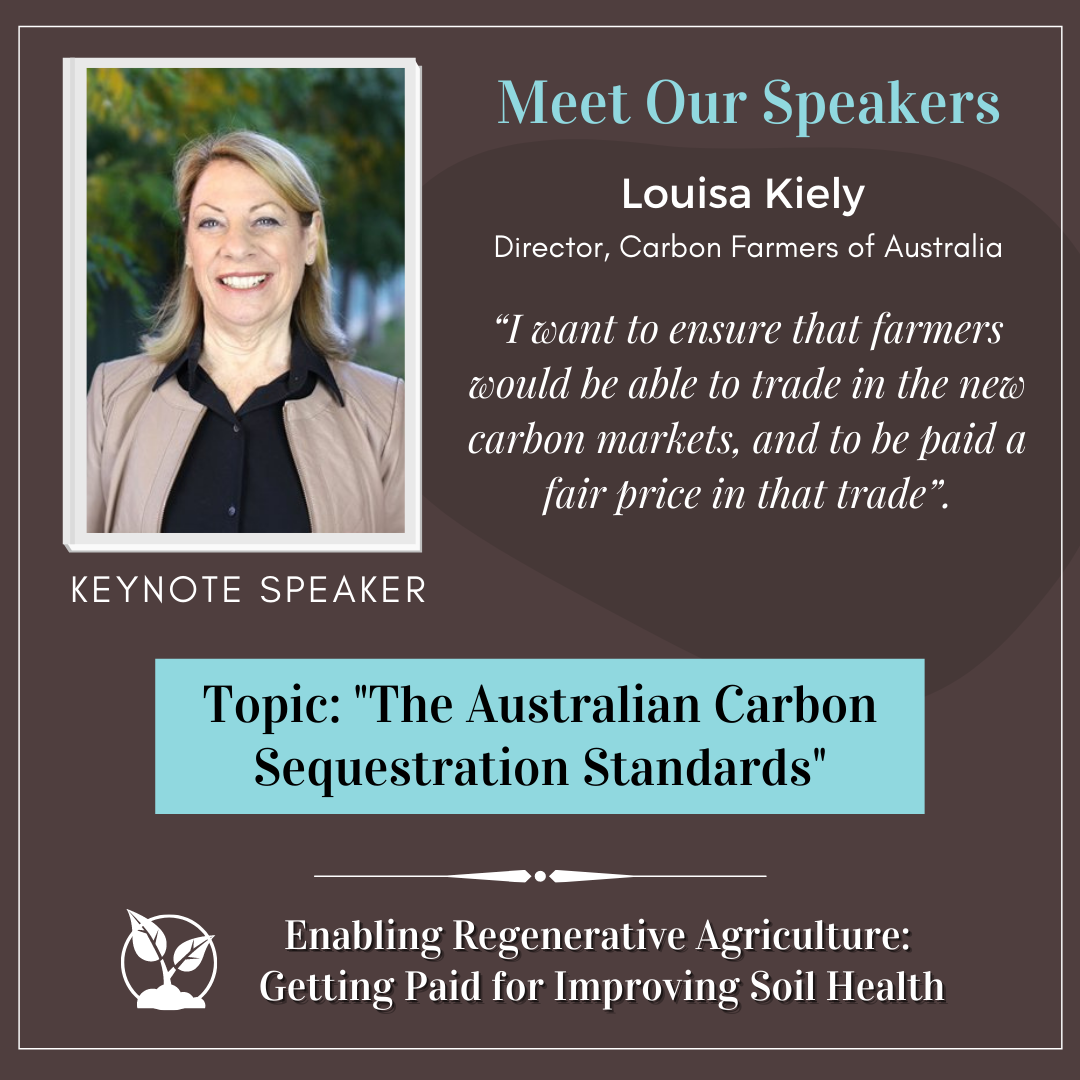 Ms. Kiely is the Director of Carbon Farmers of Australia.

Louisa obtained her Bachelor of Agricultural Economics from the University of New England located in New South Wales (SE) Australia in 1976. She worked in the market research industry with her husband Michael from 1991-2003, established and grew a city-based marketing and advertising agency from zero to 55 personnel. Intent on following her first choice of career, she subsequently studied for the Advanced Diploma of Farm Management at Sydney University and trained in Holistic Farm Management.

She was selected by the Central Western NSW  Management Authority as one of 10 highly innovative landholders using farm planning and soil restoration practices. Through these experiences, she became convinced that soil carbon could solve many agricultural, environmental, and climate change problems. This background led to the momentous event of founding the Carbon Coalition Against Global Warming in  2006, to lobby for the right of Australian landholders to trade on the emissions offset market the credits they can earn by sequestering carbon in their soils. She has consistently campaigned for farmers’ rights to sell carbon they grow in soils. In 2007 she co-founded Carbon Farmers of Australia (CFA) – a trading arm of the Carbon Coalition. CFA also published the world’s first Carbon Farming Handbook.

Seeking to build bridges with the scientific community, she organized two Soil Carbon Summits between Scientists and Farmers, and as co-founder of CFA, she organized and ran the world’s first Carbon Farming Conference & Expo in November 2007. By 2019 she produced the 9th National Carbon Farming Conference & Expo, the biggest yet with delegates from every state in Australia and from all over the world.

I want to ensure that farmers would be able to trade in the new carbon markets, and to be paid a fair price in that trade. -Louisa Kiely

I have a passion for soils, and look forward to the day that soil carbon is traded, under the Carbon Farming Initiative - because it is the largest carbon sink over which we have control, and as you return carbon to the soils you improve its water holding capacity and structure. A win/win for farmers and for climate change mitigation. -Louisa Kiely