Seeds to the People!

This pandemic has brought into even sharper focus the need for resilient local food and seed systems--and a run on seeds across the county. Cultivate Oregon is partnering with Rogue Seed Keepers to immediately get seeds (and some starts) into the hands of those that need them, especially connecting heirloom seed varieties like the Three Sisters (corns, beans, squash) with indigenous communities in Oregon, and potentially beyond.

However, we are also working to simply connect those in need with the seeds that we have available, which include many other seed varieties.

Cultivate Oregon and Rogue Seed Keepers have officially become a “seed hub” for the Cooperative Gardens Commission and we received our first shipment of seeds to share! We have additional seeds and starts from our connections with Oregon’s seed growing community. Thank you #coopgardens!

However, because of the timing of getting seeds dispersed into communities for *this* growing season, we are looking for emergency funding for Phase I of this work, which includes the purchase of additional small envelopes for seeds that are currently in bulk, larger envelopes for mailing, postage costs, and potentially small stipends for people packaging and transporting the seeds. Even small donations will help! Please donate right now if you can.

If you're in Oregon and in need of seeds to grow food, or if you would like to volunteer for this project, please contact us here.

Phase II will be working on a seed germination project to determine the viability of large stores of seeds that also will be shared with communities in need. Please stay tuned for more information.

Panic Buying Comes for the Seeds

Posted on News by Laura Jean · April 03, 2020 9:01 PM
The coronavirus pandemic has led to a run on vegetable seeds across the nation, which brings into sharp relief the need for resilient local food and seed systems. Cultivate Oregon and its coalition partners have been advocating for protections for the vegetable specialty seed industry so Oregon can ensure a climate-adaptive seed system that improves regional food security. We are also participating in the national Cooperative Gardens Commission #CoopGardens to distribute seeds to people in need.

This eye-opening and informative story from the New York Times, Panic Buying Comes for the Seeds, is a must-read! Hear from our local Victory Seed Company on what they're experiencing during these challenging times and why it's so important to protect our seeds.

I knew firsthand how calming gardening can be, especially when you’re not dependent on the food for your immediate survival. Time slows down a little, thoughts meander, and a feeling of flow can arrive, even when the land you’re cultivating is a tiny patch in earshot of a bus stop.

But as I searched for seeds to grow beautifully swirled red and white Chioggia beets, fiery peppers and enough basil to start my own pesto company, website after website warned that my vegetative dreams may be delayed.

"It feels like we are selling toilet paper," Mike Dunton, the founder of The Victory Seed Company, a small seed company focused on horticultural biodiversity told me via email. (He was too busy filling orders to come to the phone.)

I’d been searching his company’s website for glass gem corn, a popping corn that originated with Carl Barnes, who was a part-Cherokee farmer in Oklahoma. In recent years, the corn has become internet famous because of its kaleidoscopic jewel-like appearance. My pandemic prep included buying four pounds of standard yellow popping corn; glass gem corn felt like a way of stepping up my game.

But the website cautioned that all buyers were agreeing to abide by “pandemic ordering terms,” and warned that the current shipping backlog was 18 to 24 days.

Clearly, I was not the only person who felt that the best path through the pandemic was to panic-buy a bunch of seeds."

Noah Schlager, the conservation program manager of a nonprofit seed seller called Native Seeds/SEARCH, said: “I was talking with a colleague who was saying that a lot of elders lived through the Great Depression, and they remember times like this."

“They’ve been saying, ‘This is the time to be saving these seeds and making sure that we can feed ourselves,’” he added.

The mission of Native Seed Search, a nonprofit, is to promote and conserve the crop biodiversity of the arid American southwest. (Native Seed Search is responsible for bringing attention to glass gem corn.) The company sells seeds to the public, “but our priority is seeds for Indigenous communities,” Mr. Schlager said, pointing out that the Navajo Nation is already suffering because of the new coronavirus.

“They’re oftentimes the last place where real aid, or FEMA support, or anything really gets handed out to people,” he said." 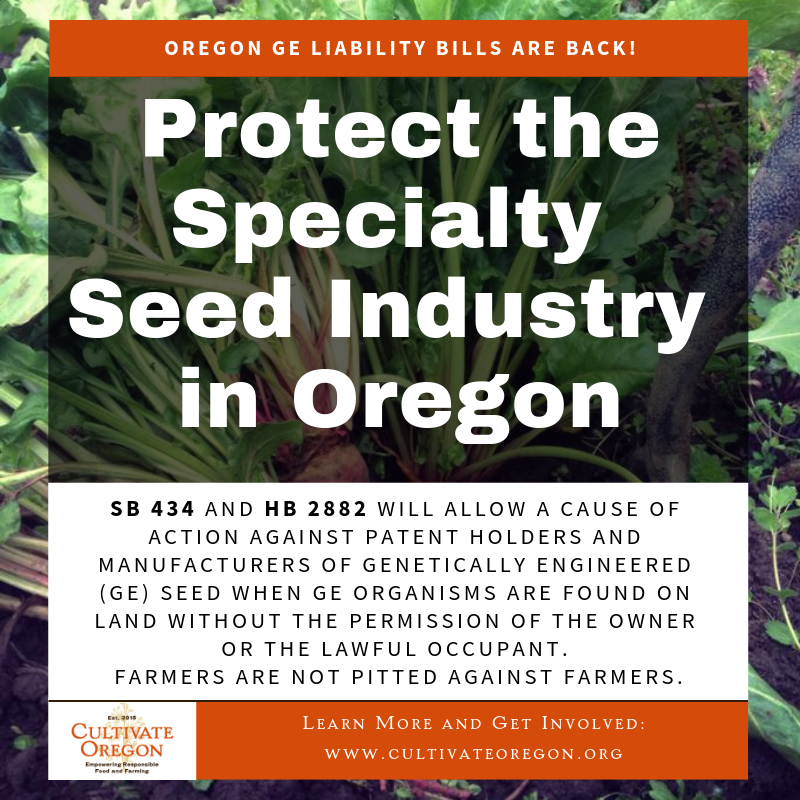 Cultivate Oregon and coalition partners are back in Salem to protect Oregon agriculture and the specialty seed industry by creating accountability for genetically engineered (GE) contamination events in Oregon! SB 434 and identical bill HB 2882 have been filed and have been placed in the Judiciary Committee in both the Senate and House. It is possible that we will need to call upon you to help us support these bills in the next couple of weeks. You can help by submitting testimony, traveling to Salem to testify at a hearing along with our lobbyist and other coalition members, and/or adding your name to our public list of supporters. So please sign up for our newsletter and action alerts to stay updated.

SB 434 and HB 2882 hold patent holders or licensed manufacturers accountable when GE organisms are found on land without permission of the owner or lawful occupant. These bills WILL NOT pit farmer against farmer. The parties that will be held responsible are the corporations behind genetic engineering, not the farmers who use them since in some instances, contamination is out of the hands of the farmer who planted the seed. GE contamination, and the threat of contamination, costs farmers, including Oregon farmers, billions of dollars. It is time to level the playing field and hold the corporations behind the technology that is responsible for this contamination accountable.

We’re not doing this alone--Our Family Farms, Center for Food Safety, Oregonians for Safe Farms and Families and Friends of Family Farmers are involved in this important work to ensure that we have a specialty seed industry for generations to come.

As many of you know, GE contamination is a one-way contamination and the burden falls on the farmer who needs to fence it out, which can be impossible in some geographic regions. Further, the legal precedent is not favorable for a farmer who is inadvertently contaminated by somebody else's GE crop. GE contamination is often irreparable. For example, the GE bentgrass infestation in Malheur and Jefferson counties is now the responsibility of the state since the federal government deregulated bentgrass, so there no longer are any legal teeth to hold Scotts and Monsanto responsible for this ongoing contamination.

Oregon is an incredibly unique seed growing region and it is important that we protect this legacy. Oregon is one of the top five vegetable seed producers in the world, owing to the state’s fertile valleys and temperate climate. Specialty seed growers in the state grow radish, cabbage, onion, Swiss chard, squash, beets, grasses, among others, for seed, which are planted by farmers around the world. Our specialty seed industry is worth at least $50 million dollars annually with room for growth if the right protections are in place. Ensuring that Oregon has a robust specialty seed industry that includes organic seed production will help create an environmentally and economically resilient food system, especially in terms of adaptive seeds that will help fight climate change.

Why is this legislation needed:

Read full text of both bills and track them here:

This International Day of the World’s Indigenous Peoples, August 9, is an opportunity to celebrate the ecological and cultural value of indigenous foodways. In 1994, the United Nations General Assembly declared the day to encourage the world to protect and promote the rights of indigenous peoples. Celebrating their cultures means preserving their time-tested farming practices, agricultural knowledge, and traditional crops that can help address global climate change and food insecurity.

Of the roughly 250,000 plant species known to humankind, an estimated 30,000 are edible and approximately 7,000 have at some point been used as food. However, more than 90 percent of crop varieties have disappeared from farmers’ fields during the past 100 years; the varieties left that build our food system are predicted to suffer under climate change. The biodiversity maintained on indigenous peoples’ farms may be the key to building resilient food systems that can withstand changing weather patterns, meet nutritional and cultural needs of communities, and rehabilitate degraded ecosystems.

However, popularizing traditional crops in the international market can produce varying health and income effects for indigenous communities. Protecting indigenous peoples requires sustainably and ethically sourcing these crops from companies with social missions, such as fair trade organizations improving the lives of indigenous farmers.

Food Tank is highlighting 30 historically and agriculturally significant fruits, vegetables, and grains from regions across the globe. These food crops can thrive under a variety of harsh environmental conditions, help to rehabilitate degraded landscapes, and provide farmers and their communities a range of health and environmental benefits.

A Look Inside Life of a FoFF Organizer and FoFF Programs

Friends of Family Farmers does incredible work in our state, and has some valuable resources we wanted you to be aware of.

Recently, Lindsay Trant of FoFF published a blog post detailing her experience as a Field Organizer and describes some of the programs and resources FoFF offers. Be sure to read the full post and consider donating to help them continue their work!

The side of agriculture that I get to see during my farm visits is largely regenerative, restorative, and responsible. I get to travel all over the state learning from amazing farmers and ranchers that are working hard to provide food in incredibly innovative manners. They work with their land, their communities, and their animals to create a vibrant and diverse food system throughout Oregon. The growing number of producers that have joined our Oregon Pasture Network (OPN) are great examples of this. You can read more about the work our OPN Members do here. and can support them directly via our recently published OPN Product Guide.

On the other side of my role with FoFF, I work with young and aspiring farmers; the ones who dream of continuing the work of other producers before them, working to regenerate our food system. Over the course of the summer, I attended and presented at events put on by organizations with similar missions to ours. I showed beginning farmers how to use Oregon Farm Link (OFL) to find land to start – or expand – their farming operations, and recruited landholders to list their land on OFL in order to find someone to keep the land in agricultural production.

Photo from Friends of Family Farmers.

The Global Alliance for the Future of Food (GA) released a report, titled “Seeds of Resilience: A Compendium of Perspectives on Agricultural Biodiversity from Around the World.” Led by the GA’s Agroecological Transitions Working Group(ATWG), the publication focuses on the role seeds and seed diversity can play in sustainable agriculture, food security, and nutrition. Lauren Baker, Consultant on Strategic Initiatives and Programs at the GA, told Food Tank that the organization “believes that seeds are the foundation of sustainable, equitable, and secure food systems and that maintaining and enhancing agricultural biodiversity is critical in light of global challenges such as climate change, and food and nutrition security.”