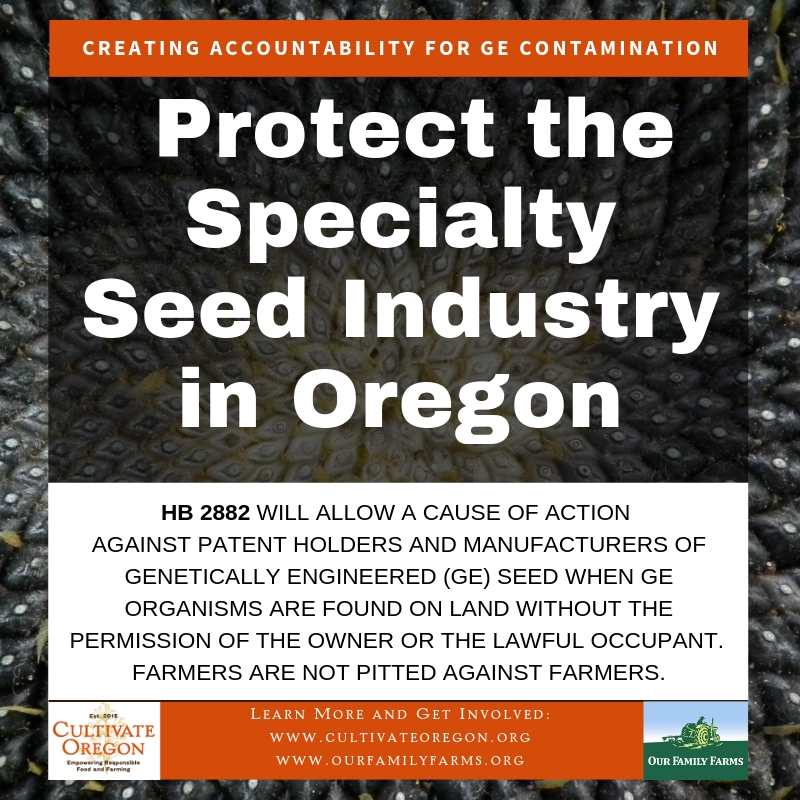 Cultivate Oregon and coalition partners are back in Salem to protect Oregon agriculture and the specialty seed industry by creating accountability for genetically engineered (GE) contamination events in Oregon!

HB 2882 will hold patent holders or licensed manufacturers accountable when GE organisms are found on land without permission of the owner or lawful occupant. This bill WILL NOT pit farmer against farmer. The parties that will be held responsible are the corporations behind genetic engineering, not the farmers who use them since in some instances, contamination is out of the hands of the farmer who planted the seed. GE contamination, and the threat of contamination, costs farmers--including Oregon farmers--billions of dollars. It is time to level the playing field and hold the corporations behind the technology that is responsible for this contamination accountable. Read the full text of HB 2882 here.

We’re not doing this alone--Our Family Farms, Center for Food Safety, Oregonians for Safe Farms and Families, Friends of Family Farmers, and Oregon Organic Coalition, are involved in this important work to ensure that we have a specialty seed industry for generations to come.

As many of you know, GE contamination is a one-way contamination and the burden falls on the farmer who needs to fence it out, which can be impossible in some geographic regions. Further, the legal precedent is not favorable for a farmer who is inadvertently contaminated by somebody else's GE crop. GE contamination is often irreparable. For example, the GE bentgrass infestation in Malheur and Jefferson counties is now the responsibility of the state and local farmers and ranchers since the federal government deregulated bentgrass, and as a result there no longer are any legal teeth to hold Scotts and Monsanto responsible for this ongoing contamination.

Oregon is an incredibly unique seed growing region and it is important that we protect this legacy. Oregon is one of the top five vegetable seed producers in the world, owing to the state’s fertile valleys and temperate climate. Specialty seed growers in the state grow radish, cabbage, onion, Swiss chard, squash, beets, grasses, among others, for seed, which are planted by farmers around the world. Our vegetable specialty seed industry is worth at least $50 million dollars annually with room for growth if the right protections are in place. Ensuring that Oregon has a robust specialty seed industry that includes organic seed production will help create an environmentally and economically resilient food system, especially in terms of adaptive seeds that will help fight climate change.

The ban on growing canola in the Willamette Valley sunsets later this year. Canola poses exceptional threats to a wide variety of organic and conventional vegetable seeds and as of right now, it is unclear how ODA will address this before the ban sunsets. Potential GE canola contamination unfortunately hasn’t been a large part of the official discussion, and even non-GE canola seed was recently found to be contaminated. As a result European farmers are ripping up their crops and won’t be able to use the fields for two years.

Why is this legislation needed?

• Farmers lack protections from GE contamination because Oregon does not regulate GE crops. Further, with the exception of Jackson County, all Oregon counties are preempted from making decisions regarding seed cultivation in their jurisdictions, leaving a large regulatory gap.

• Current legal precedent is unfavorable for farmers contaminated through no fault of their own. The legal theories of trespass, nuisance, negligence, and strict liability are not useful in GE contamination cases stemming from pollen drift. Right to Farm laws have not been useful either.

• GE seeds are patented and because U.S. patent law does not require a showing of intent to support a finding of infringement, a contaminated farmer can actually be the one sued if their field(s) have a contamination level greater than one percent.

• Federal GE oversight is also inadequate. For example, the USDA failed to analyze the environmental impacts of GE creeping bentgrass escaping from field trials. The bentgrass did escape and has created an infestation in Malheur and Jefferson Counties. After the escape, the corporations behind the bentgrass lobbied for it to be de-regulated, meaning there is no longer a legal hook to hold them accountable. The clean up will fall to affected farmers and the state in
perpetuity.

• The Government Accountability Office (GAO) determined that the ease by which GE material from crops can be spread makes future contamination events likely. And with commercial GE crops, the USDA disavows any oversight.

• According to Organic Seed Alliance, 70% of organic farmers believe that federal GE regulations are inadequate for protecting their farms from contamination.

• The burden of preventing contamination unfairly falls on non-GE growers, who need to fence it out, which in some geographic regions, like the Rogue Valley, is impossible to do.

• There is currently no way to collect compensation for contamination testing costs, prevention measures, and market losses from GE contamination, nor costs associated with cleaning up contaminated seed lines—if such cleanup is even possible. Some GE contamination cannot be eradicated.

• While organic growers may not lose their certification over GE contamination, they can lose their markets and their reputations. Small farmers can be put out of business in one season.

• It is time to level the playing field without pitting farmer against farmer. This bill places the liability on patent holders and manufacturers of the seed. Why should highly profitable companies bear no cost or responsibility for a problem that they are largely the cause of?

• Oregon should challenge monopolistic, corporate control of the food system. Three companies control 70% of agrochemicals and more than 60% of seeds worldwide.

How could this legislation benefit Oregon?

• Oregon is one of the top 5 seed growing regions in the world. The specialty seed industry is valued at $400 million and the vegetable specialty seed contained within that is worth $50 million annually. Actual and potential GE contamination threatens this industry.

• Oregon is one of the last U.S. regions where crops aren’t widely genetically contaminated— which has allowed the state to become a leader in high-quality vegetable and specialty seed crops, as well as wheat and alfalfa, all of which have been put at significant risk by increasing GE contamination threats. Protections are needed if the state wants to maintain, and grow, this rich natural heritage. Co-existence needs to be approached through this lens.

• The U.S. organic seed market for crops was worth more than $460 million in 2015 and is predicted to reach $5.4 billion by the year 2024. However, the supply for organic seed is insufficient. Ensuring protections for organic seed growers could be a major economic opportunity for Oregon. Organic seed can yield between $10K and $50K an acre; GE seed only $1000 an acre. Canola, at best, yields $1500 an acre.

• According to the last census that counted seed diversity (conducted in 1983), the U.S. had lost 94% of vegetable seed varieties. It is time to prioritize conditions to increase diversity and improve regional food security, as well as champion regenerative agriculture practices.

• The Oregon seed community has programs to ensure that this industry endures, including educating new seed farmers and seed farm succession planning, but the threat of GE contamination raises a barrier to their continued growth, especially for organic seed growers.

• There are markets for these seed products. Organically Grown Company (OGC), the largest organic produce distributor in the PNW, is actively working with seed breeders to create regionally adaptive seed for winter food production—another important step to food security.

“When GE patent holders are successful, they reap huge profits from their products. When things go astray, like the escape of GE Bentgrass in Malheur county, they need to be held economically accountable for all
damages caused – fair and simple.” Jerry Erstrom Farmer & retired BLM Natural Resource Specialist, Malheur County

“Every farming community deserves the right to protect itself from the impacts of genetically engineered crops.” Moria Reynolds Casa Verde Farms, Hood River 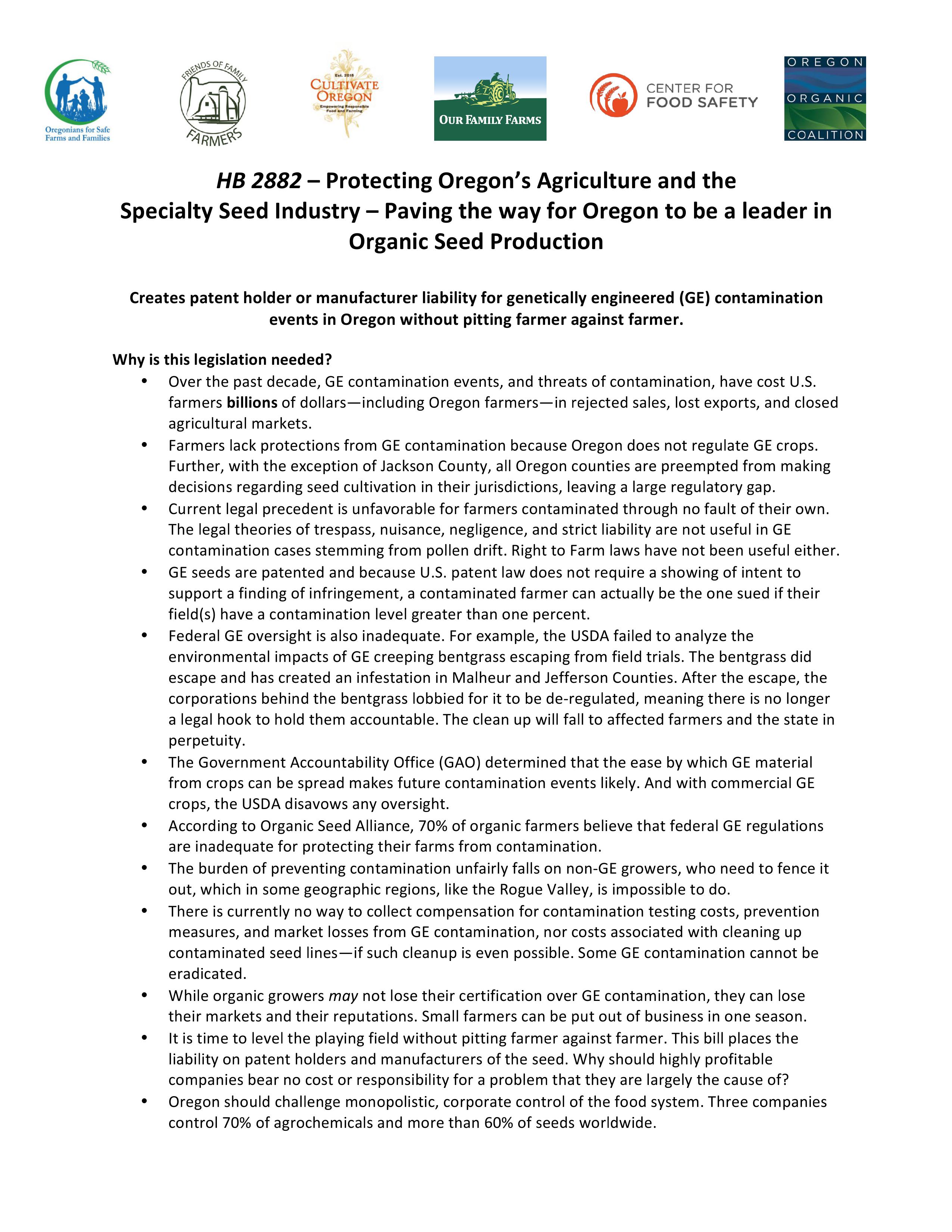 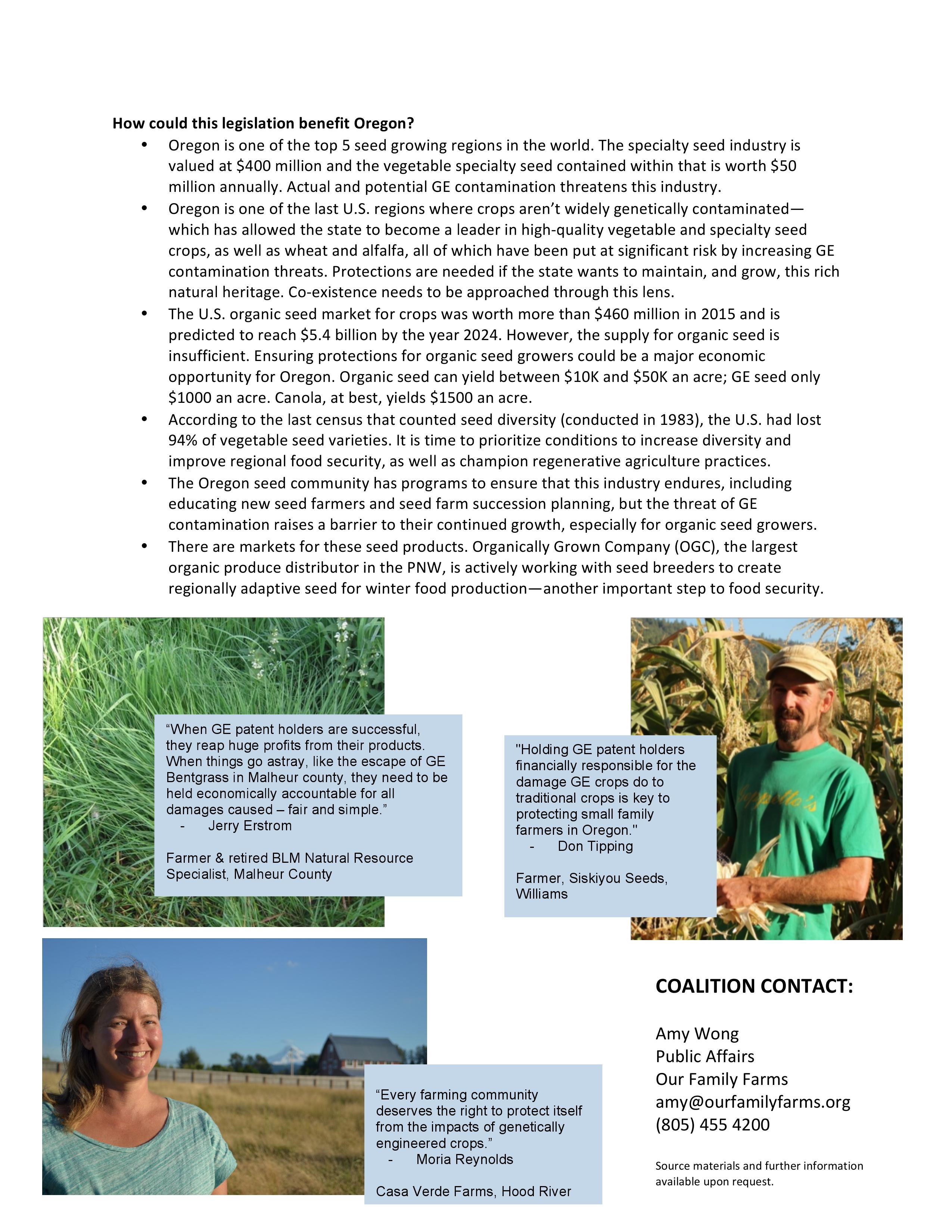 Is HB 2882 moving? Yes! We are fortunate that the democratic leadership, and some key Senators, recognize the need for something to be done about GE contamination in Oregon. That said, opposition forces have peppered the legislature with many concerns about the bill. For example, that holding patent holders and manufacturers liable for GE contamination will have a chilling effect on business in Oregon; that GE contamination isn’t a problem in Oregon; that other legal remedies exist; that this is an issue that should be managed solely through “farmer to farmer” handshakes; and that there could be negative, unintended legal consequences. We don’t agree with these concerns and are working hard to counter them in both chambers. In the meantime, Speaker Kotek has asked Rep. Wilde to work with the coalition to address these concerns and come up with a version of the bill that can garner broad support. We are hoping that we can find a way forward that still puts liability on the chemical corporations behind GE technology. This is the first time that we have had an ally in the legislature directly working with us so it is a big step forward and Rep. Wilde has been engaging and genuinely open to learning more about this topic.

What happened to SB 434? When we introduced HB 2882, we also introduced an identical Senate Bill, SB 434. We were assured from our Chief Senate sponsor, Sen. Frederick, that the Chair of the Senate Judiciary Committee, Sen. Prozanski, would schedule a hearing. Sen. Prozanski even signed onto the bill and has long been a supporter of GE issues. However, Sen. Prozanski became concerned that there is not a sufficient legal nexus between GE contamination and manufacturers or patent holders. While this is disappointing, Sen. Prozanski committed to holding an Informational Hearing followed by a Work Group because he does see the need to “draw a line in the sand” with GE issues but wants to make sure that he does so in a way that he is comfortable with. Our Chief Sponsor in the Senate has gotten pieces of legislation out of Work Groups before, so ultimately, this is also a step in the right direction and could allow for our voices to be heard in a less-rushed environment, as well as for a group of allies to convene to further push the issue. We will balance continuing to work on the House version while simultaneously addressing potential future solutions with Sen. Prozanski in the Senate.

It often takes multiple tries to get legislation passed, so while some of you may be feeling disappointed, we making progress and the House bill is still moving! We also found new Republican allies this session. Rep. Findley and Rep. Stark are supportive and we hope to find more bipartisan buy in. We also are working with an exciting new coalition partner, Oregon Organic Coalition, and through this relationship, we will be attending quarterly meetings at ODA. These are really great developments.