posted by Laura Jean
Earth Island Institute's Cultivate Oregon, along with Center for Environmental Health, Center for Food Safety, and International Center for Technology Assessment, filed a complaint yesterday, March 22, against the USDA over its withdrawal of the widely-supported Organic Livestock and Poultry Practice Rule. The lawsuit, filed in the Northern District of California, seeks immediate implementation of the rule and its improved livestock care standards. The plaintiffs are being represented pro bono by the Center for Food Safety. 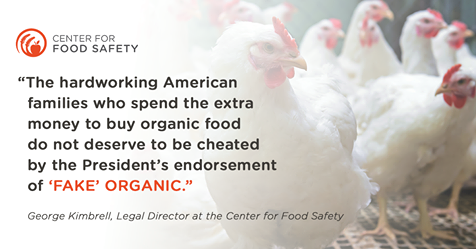 The regulation, finalized by the Obama USDA in early 2017, strengthened the minimum requirements for the care and well-being of animals on organic farms. Most notably, it established clear minimum spacing requirements and specified the quality of outdoor space that must be provided for organic poultry. The regulation was the culmination of over a decade of work by organic stakeholders and the National Organic Standards Board. The Trump administration delayed the final rule's effective date three times, and then formally withdrew it.

"Organic consumers and producers believe that Organic means providing animals with sufficient space, meaningful outdoor access, proper lighting, appropriate diets, and clean conditions. If not reversed, the new Trump decision will shatter confidence in the standard's integrity and trust that all products carrying the organic seal were produced with care for animals and the environment. It will allow honest and well-intended organic farmers that have always raised their livestock under a high standard of care to be undercut by fake organic production that is little more than animal factories." - Cameron Harsh, CFS senior manager for organic and animal policy.

In the March 13th decision, USDA claimed the animal care regulations could not be issued because the agency lacked the authority to regulate practices such as animal space and preventative health care for livestock under the Organic label. With this decision, the Trump administration made a complete reversal of the legal and policy positions that the USDA has held for 28 years, since the inception of organic, and what organic consumers and farmers believe: that organic standards do include considerations of livestock care and husbandry. It also claimed that the regulations would be costly, despite its own economic analysis finding only minor costs. Visit Center for Food Safety to learn more.