End of Session Update: Big win! The Willamette Valley is Protected (until 2023) from Increased Canola Acreage

There were many highs and lows throughout this Legislative Session and we experienced a steep learning curve that has better set us up for future progress in Salem. While we know that many of you join us in being gravely disappointed that a toxic political culture led to HB 2020 (the climate change bill) being taken off the table for now, we are thrilled to be able to update you on some positive developments that happened over the last couple of days.

SB 885, the bill to maintain the 500 acre canola cap in the Willamette Valley, passed out of the Senate on June 29th and the House on June 30th! The bill originally was supposed to be voted on the same day as HB 2020, but the Senate Republicans walked out and fled the state to avoid being forced back to work by Oregon State troopers. It is a testament to the hard work of many people, as well as supporters contacting their legislators (it works!), that this bill was prioritized once the Senate Republicans finally returned. 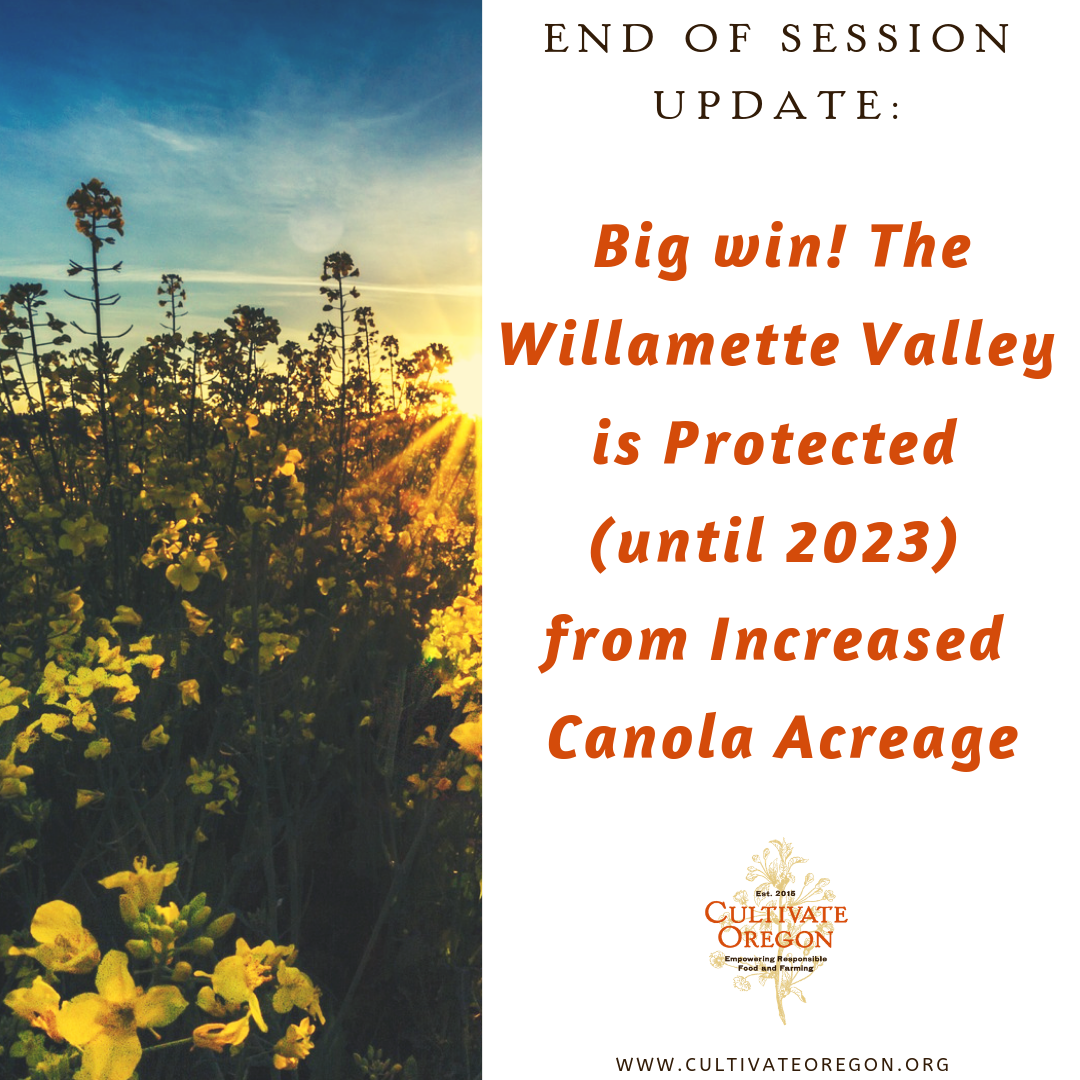 We also made headway with ODA and their approach to canola. Since no one knew if SB 885 would pass, ODA had to undertake a rulemaking process, which ran parallel to the legislative process, to ensure that there would be regulations governing canola cultivation come July 1, 2019 when the previous acreage cap sunsets. As part of the rulemaking process, ODA assembled a Canola Rules Advisory Committee (RAC) and while we were not officially at the table, we attended all of the meetings as an observer, and supported our coalition partner, Friends of Family Farmers, who did have a seat at the table. We also made sure that there was a robust turn out for the May 29th hearing on ODA’s proposed canola rules. Testimony in support of limits on canola cultivation far outweighed testimony in favor of canola! And ODA listened and included a canola exclusion zone in the final rules, as well as a three-mile isolation distance to protect specialty seed growers, especially organic producers, who are outside of the exclusion zone. We will make sure to hold ODA accountable in terms of following up on some topics that are still pending, including banning or limiting genetically engineered (GE) or herbicide tolerant (HT) canola varieties.

However, since SB 885 will become law when Governor Brown signs it, it is our understanding that ODA will do emergency rulemaking to maintain the 500 acre cap and it is unclear if the other elements of the rule that the agency just drafted will be included. We hope so, but if they don’t this round, we think that it is possible to get them in place in the future. The canola debate is far from over because SB 885 will sunset in 2023.

There are also exciting developments that came out of the State Grange convening which took place in Molalla from June 22nd to 27th. The Grange passed two resolutions regarding GE-free zones and overturning the seed preemption to allow Josephine County’s GE ban to finally go into effect. We will be working closely with the State Grange to ensure that the Grange resolutions are translated into viable legislative concepts.

We also recently checked in with our legislative champion, Rep. Wilde, and he is ready and willing to keep working on GE contamination issues in the interim and beyond.

All in all, we made some impressive incremental progress this session and we could not have done it without your support—financially, as well as by responding to action alerts and coming out to testify.

To recap, here are some of our accomplishments:

Here are some other recent related media links that may be of interest:

We are going to take a short break but will be back in Salem soon for on-going work group and ODA meetings and getting ready for future sessions. Thank you again for your support and please consider joining us and donating to make sure that we can keep up the work year-round.